We looked into the public reactions in public forums and social media. It looks like Google this time has managed to get a mixed reaction.

As soon as Google Search Liaison twitted about the update reactions from all across the world started coming in. Although people were talking about some unknown update since the last few days.

We looked into the public reactions in public forums and social media. It looks like Google this time has managed to get a mixed reaction. There are a number of people those who are so not happy about this. Their rankings have fallen off a cliff. But there is also a handful of people who are saying that their rankings have improved since the update started rolling out.

The majority of the sites which have taken a hit badly are small sites specially blogs or smaller affiliate sites. But there are some big sites as well. Have a look at these tweets. 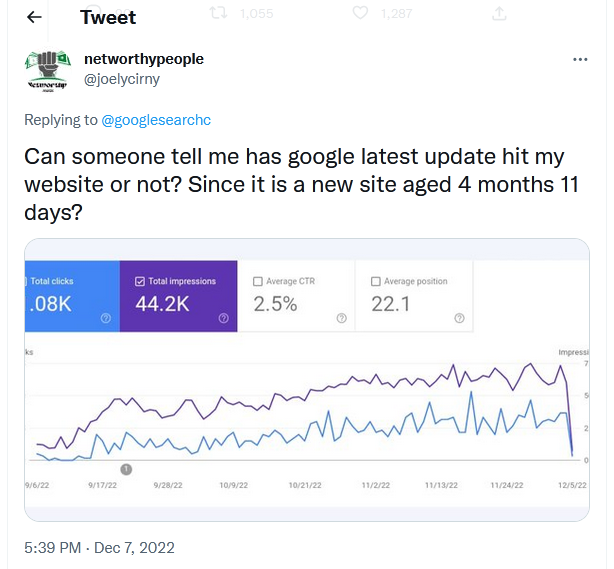 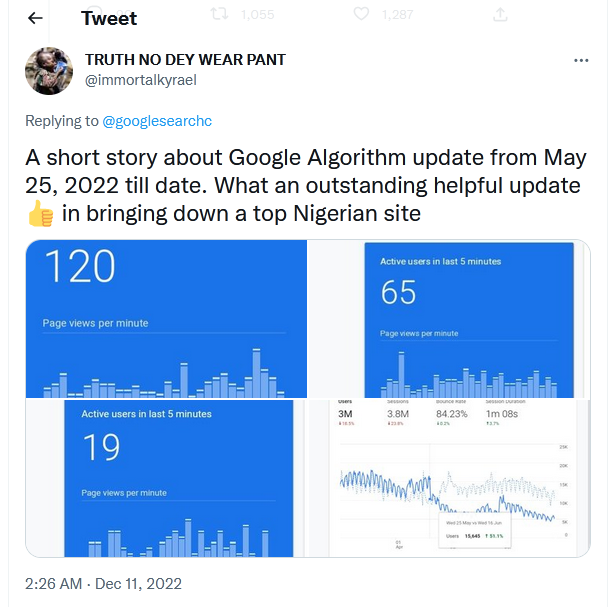 Here are some replies from Webmaster World.

My guess is this update will have the opposite effect of its name, being hurtful to pages with unique content, products, services, etc. But I’m sure it does help shape the reality of webmasters when they use names like “helpful” or cute & cuddly creatures like a Panda and so on. It’s been years since Google released an update that actually helped us, but judging by Google’s profits the updates sure helped them.

I am seeing a huge hit today…my USA traffic is down 54% this morning. Ex-USA seems to be steady. Previously I have seen al EN language traffic very rocky, surging one day, dropping the next…but USA has been affected the most. I have lost a considerable number of top 10 ranking terms today alone, both mobile and desktop.

It is not helpfull Content update, it is: HELP google get FULL Control update

Some of the replies from our own forum’s google update discussion.

Organic traffic has dropped of a cliff.

We are just holding onto direct and referral traffic.

Back then gaming niche was fine.

But now it’s not. Weekend traffic has fallen to 50%. And even week day traffic is down by a lot.

Some of the replies in Black Hat World.

Interesting, my site that got hit on September 13th (I’ve lost track of which update was named what, have to go by dates) seems to be doing a bit better today. I did some improvements to it, not as much as I wanted to, still some thin content on there but I’ve lost motivation for now. Let’s see what happens in the coming days. Anything is a bonus, I’ve kinda written it off.

I was wondering why my one of my non-English PAA sites, who’s had a nice growth over the last month, suddenly took a nose-dive yesterday…I didn’t know there had been an update, but that explains it. And here I was sitting and preparing to hit 50k sessions next week so I could apply for Mediavine

We have noticed that many are also facing an indexing issue in Google. Our suggestion is that submit your pages to social channels and different content sharing sites (social bookmarking sites, directory submission sites, blog submission sites) as well. They may speed up the process of indexing.