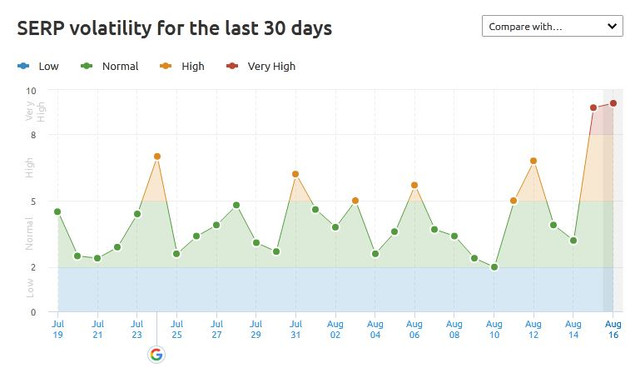 Since the last 48 hours more or less most webmasters around the world has come to this conclusion that an update indeed is going on and it is a big one.

For the last couple of days there has been a lot of debates regarding an update. Some said about a bug in Google’s end, others were discussing about any experiment in the SERP’s taking place.

Nobody knew for sure. But since the last 48 hours more or less most webmasters around the world has come to this conclusion that an update indeed is going on and it is a big one.

Here are some of the replies given in the WebmastersWorld forum.

My websites as well as many of my clients dropped so much that I though many of them are about to disappear completely from the SERP. This is the First time I’m experiencing such huge drops. Google is definitely ruining our lives for good with their crappy updates

This morning, zero traffic. From lunch until now a very heavy traffic. Best pageview in such a short time since the creation of my website. Suddenly everything disappeared… Today G is crazy…

Here are some replies from the Black Hat World forum.

Yeah but this does not seem like a regular weekly or monthly ones. Seems like big core update again if i am not wrong

Yes, definitely. Just saw one of my authority sites lost lots of rankings. Something big is coming or going on.

HUGE update for my sites, a lot of Pinterst pins ranking above my homepage. Pages that were sitting in the top 3 for years now in the 60s+

Some of the replies from our own forum.

Google is performing some kind of experiment. It’s not an update. Because if rankings fell or disappear, they came back after a few hours.

Earth shattering movements in many niches. I don’t think now that it is an experiment or a bug. Some keyword’s across many niches just popped at the top from nowhere and some has gone to nothing.

For those who are facing issues indexing new article through GSC and automatically. It’s my personal opinion that get your page exposed somehow. Maybe its via social media channels or through social bookmarking sites. The method doesn’t matter here.